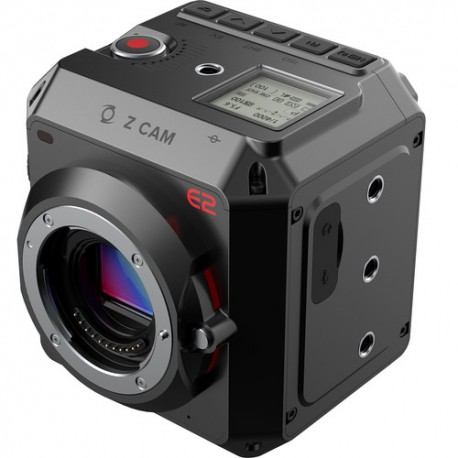 Availability: This product will be available later

The Z CAM E2 Professional 4K Cinema Camera shoots DCI and UHD 4K at up to 160 fps, as well as HD up to 240 fps, and records to a CFast 2.0 card (not included). An optional cable enables syncing two E2 cameras together, and the system supports syncing up to 100 cameras. The camera features a 4/3" sensor with 10-bit color support and nominal 13 stops of dynamic range with 16 stops when set to WDR. The camera supports recording in ProRes 422 in 10-bit, as well as H.265 and H.264 codecs for efficient compressing of your image.

An included Gigabit connector provides data transfer and control of the camera, and you can also use an available iOS app to control the camera and to view a live image preview. You can also control it locally by the buttons along the front edge of the camera. The camera powers from an NP-F series battery (not included) or via the included AC adapter.

Firmware 0.88 Update
Firmware 0.88 brings a few improvements including ZRAW recording and DCI/UHD 4K capture at up to 160 fps.
4K Capture and Recording

iOS App
Z Camera is a mobile application for camera live preview and control through Wi-Fi/USB cable connection. It allows you to start/stop recording and adjust the camera settings remotely, and also has advanced features on camera live preview. It can be downloaded from the Apple App Store.
Camera Body